200 years ago, Harihar was a tiny town. As traditionally handed down the ages, a poor Brahmin lived with his wife and two young children in dire difficulty. Poverty was rampant at home. His wife and children were ailing from incurable tuberculosis. Yet this Brahmin put up with the situation.

As the days passed by, one day early in the morning, in order to fulfill his morning ablutions, he got into the river Tungabhadra to have the holy dip.  It is handed down to us that he accidently slipped, and then losing control of himself he was eventually swept along with the currents. To his great dismay, he got caught in a swirl, not realizing what it was. All along he was struggling to come out of it, but to no avail. 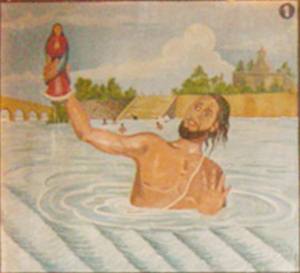 The struggle continued. He thought to himself:  “what will happen to my wife and children if I die? I’m in the jaws of death”. He cried for help, thinking that somebody would come for rescue, but none heard. His loud clamours for help fell on deaf ears as it. After a series of shouts, he was terribly tired and thinking that his end was near, he lost the hope of survival. Then all of a sudden, he saw a small wooden piece floating in the swelling river and caught hold of it. Indeed it was a statue

The moment he caught hold of the statue, an electrifying experience engulfed him and an indescribable force made him come out of the whirl he was struggling in. To his great surprise, He was thrown out to the shore! For the poor Brahmin, it was purely a rebirth. He was miraculously saved from being swept away by the powerful currents. Thereafter he recalled to himself how an unseen force in the form of a wooden piece touched him and then consequently saved him. 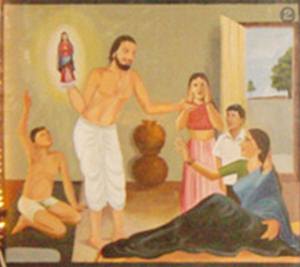 He looked hither and thither for the object, but he saw nothing. But he was holding a rare box and he opened it. It contained a statue which didn’t interest him much. He knew nothing of the statue.He didn’t want to leave it behind, so he brought it home, thinking how an unseen power and the statue he was holding saved his life from the jaws of death. He wanted to share the news to his wife and children.

Having reached home, he narrated to his wife and children how he was saved from the swirl, yet they didn’t believe. They didn’t make much of it. But the Brahmin’s children thinking that the statue was a doll, played with it by tying a string. The things that followed didn’t augur well for the children. That same night, the children had swelling all over their bodies and they had hell of time at night because of the pain. Not knowing how and why it happened, the parents were terrified. It was a nightmare for them. But the situation further deteriorated, with no immediate relief for the children. AS the evening drew by, one of his eyes became hazy, making him difficult to see things. He could feel the partial blindness in his eye. 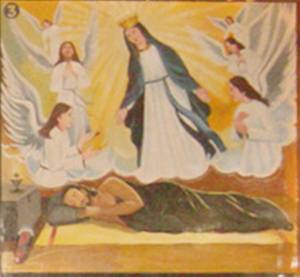 Troubles after troubles, he suffered! With a heavy heart, he fell asleep. At night, Mother Mary in the form of Queen of Heaven appeared to him in a dream, saying, “It was I in the form of a statue that saved you from the swirl”. Then he realized that it was due to the dishonor to the statue that he was succumbed to these hardships.

He would be greatly blessed if he would honour the venerable statue, Mary seemed to have uttered to him, saying further, “Honour me at Harihar, I’ll bless you abundantly”. To his great surprise, getting up early in the morning, he found indescribable joy in the house. Having realized the mistake, he prayed for forgiveness and her blessings. He received double favours from the Mother- that the boils over the bodies of his children disappeared and he got the sight back again. He and his family members touched the statue of Mother Mary with reverence and thanked her profusely. 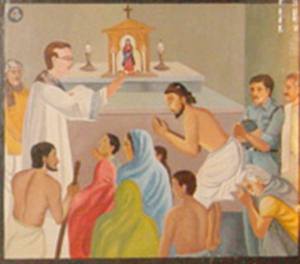 For the wonders and the favours received, he wanted to keep the miraculous statue with himself. So he placed it in niche like hole of a tree. Then he started announcing the good things the miraculous statue had worked for his family.  People started visiting the tree with curiosity. Those who came for the darshan of this statue began to call it “Satyamma”, meaning to say “Mother of Truth”. Her fame spread all around Harihar day by day.

The news about Satyamma somehow reached some Christians of Chitradurga. Quite interested to know about Satyamma, people came with great fervour to Harihar in groups. Meanwhile, a Christian soldier from Chitradurga who got interested wanted to have a darshan of Satyamma. While closely watching the statue, he found that it was none other than the statue of Mother Mary. He hit upon an idea and accordingly he would stealthily carry the statue to Chitradurga. He waited for the night. Then at night, he covered the statue with a cloth and started moving towards Chitradurga only to place it there. Had he barely travelled for 12kms by his horse near Anagodu, he felt sleepy. He was content with the fact that the statue which he stole was with him. After having the meal, he took a rest for a while. Thereafter he wanted to doubly confirm that the statue was in safe custody with him, but to his great shock, he found no statue, but only the cloth that was used for covering it. He was taken aback! He groped for the statue hither and thither, but to no avail. He could not find the statue. He just wondered how it could all of a sudden disappear. He had no answer. Still he continued searching for the statue, but he couldn’t. Feeling tired and having resigned from searching for it, he slipped into slumber in a reflective mood. 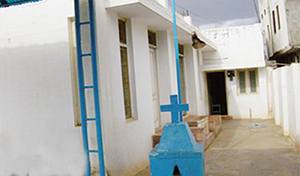 That night during his sleep Mary appeared to him saying, “Harihar is my dwelling place. Honour me at Harihar, I will bless you”. Meanwhile, as the tradition has it, the statue was miraculously spotted at the place in the tree where it was earlier. Instantly he knelt down and begged for pardon from the Mother. He was filled with gratitude to have the apparition of the Mother.

As per the instructions of the Mother, the soldier rushed to Chitradurga  to inform the British Collector of the incident  that he encountered . Not having enough courage to face the British Collector, he approached his cook to whom he narrated about the dream and also how people were attracted to Satyamma at Harihar. He also got an opportunity to explain to the Collector of how he wanted to establish the statue at Chitradurga, the way it was miraculously disappeared, then how she appeared to him in a dream and so on. Thereafter he requested the Collector to somehow get it for him from Harihar.

Having listened to him patiently, the Collector himself got interested to know about Satyamma of Harihar  and rushed towards  Harihar. The Collector, having   studied the statue closely at the house of the Brahmin, came to the conclusion that it was none other than the statue of Mother Mary. Then he made him understand that it was a statue worthy of veneration only for the Christians. He, then, commanded him to hand it over to the Christians.

Being filled with gratitude, the Brahmin narrated to him vividly how the statue miraculously saved him from the jaws of death, and also his children from their sickness, thus requesting him not to part it away from him, but allow him to have it. He also pleaded that he would make it available for veneration for both Christians and non-Christians alike and further made a will that he would give his house and the patch of land he had for that purpose. 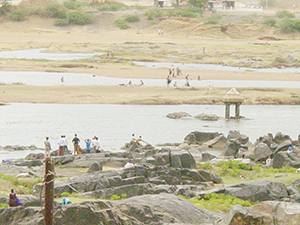 Then he requested him to heed to his plea. Moved by the story, the Collector allowed him to establish the statue in his premises. Unto this day, that place has been preserved where we find the tomb of the Brahmin and a small chapel known as the old church.

Afterwards the Brahmin family, being a staunch follower of Mother Mary, dedicated themselves to the service of the Mother. They became her devotees till the end of their life. After a few years, the Brahmin died, and as per his wish, he was buried in the church compound. Even to this day, his grave stands as monumental evidence.

Since then in memory of Mary and her Nativity, the feast of Our Lady of Health is being celebrated on 8 September with great religious fervour with thousands of people irrespective of caste, creed, language and religion. In the past, the decorated car with the original miraculous statue was taken in procession in the town but in course of time, the replica of old statue was used in place of original statue for the sake of safety. 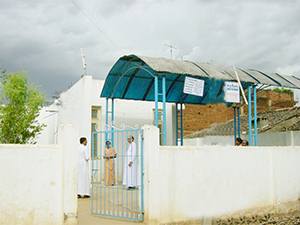